Today my guest feature goes to poet, Stephen Cope. I was lucky enough to become acquainted with this special gentleman at Swanwick Writers’ Summer School. I loved chatting to him and his accent reminded me of home. Home as in where I was born – Liverpool.

Performance poet, Stephen has a lovely surprise for you all following his article, ‘Born Again Racer’. Without further ado, let’s go over to Stephen.

Thank you Patricia for inviting me here today. I’ve always enjoyed writing my short poems especially when surrounded by the ludicrousness that is everyday family life. Navigating a sports mad son, a horsey wife and daughter, along with a koi pond and pet dogs certainly provided plenty of material. During the eighties I wrote numerous hobbyist articles on fish health,  and pond maintenance for several koi club newsletters and magazines under the pseudonym, Barely Coping!

Now that my condition has become a disability, the opportunity for a little humour hasn’t been missed. My need for orthotics and a mobility scooter haven’t escaped my attention. My poem ‘Born Again Racer’ inspired by my first scooter, was shown to Peter King, an amateur film and animation maker. This resulted in the animation now viewable on YouTube under the same name.

I joined the Heswall U3A Creative Writers group 5years ago, run by Laura Smith, a lady I’m sure many will know from Swanwick. During that time the group produced two anthologies of our stories and poems, with all profits going to two very deserving charities. Only this week our group completed its 38th Creative Writers Hour program on Vintage radio, a local internet station. I now have a collection of over 30 CDs, each with one or two of my stories or poems recorded for posterity!

I really enjoy my writing and hopefully will see my work published one day. The one story I’ve yet to write about is the day I was thrown out of the White House! I strongly believe that as a creative writer, when dipping into the real world we shouldn’t let the truth spoil a good story! And yes, I really was!

Thank you, Stephen, it’s been a pleasure. Do come again. I hope you get to see some of your poetry published as it deserves to be and I look forward to hearing your story about being thrown out of the White House.

And now for what everyone has been waiting for…

The surprise that was promised…

I hope you all enjoyed that as much as I did. Let’s find out a little more about Stephen. 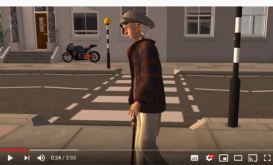 Stephen Cope was born and raised in Liverpool. He married the love of his life, Catherine, and moved to Altrincham. Five years later they moved onto the Wirral, and have lived there ever since. For 31 years up to my early retirement he worked in the nuclear industry at a nearby Uranium enrichment plant. Stephen’s response when mentioning that to me was… Oh to write about that!