Last week my husband and I took a trip to Chester to visit my aunt and uncle while celebrating our 24th wedding anniversary and my birthday. My aunt is my only surviving aunt, and I have no blood uncles, so I love the opportunity to lap up her precious stories, especially those about my late mum.

Nothing was too much trouble for my uncle as he became our chauffeur for four days. As well as visiting National Trust properties he drove us to Liverpool and I was able to see the outside of the house in Pittville Avenue, Liverpool where my mum grew up, and  where later, I visited my nanna and grandad when I was a child. In fact my winning poem, Grandad’s Garden, was inspired by the garden in this house and the wonderful huge headed dahlias and chrysanthemums that my grandad grew.

We stopped to have lunch at The Britannia Inn by the River Mersey. I felt like I’d come home.

At my special request my uncle drove us to Sefton Park. As a child this was a regular haunt of ours where we visited the Peter Pan statue and the Palm House. Last June (2018), the Peter Pan statue celebrated its 90th anniversary of unveiling when it was given to the children of Liverpool. Read more.

The palm house was closed in the 1980s due to disrepair. It was restored and opened fully in 2001. Read more.

Sefton Park also has a fairy glen a new addition to the park in 2005. Read more

We drove down Smithdown Road where my dad’s local, The Woodcroft, used to be. The house I was born in Lesseps Road was off Smithdown. I had hoped to see Lesseps Road too but it was difficult due to traffic.

New memories were made with visits to National Trust Properties Chirk Castle  and Speke Hall . At Speke Hall I discovered two trees named Adam and Eve that dominate the courtyard and planted to ward off evil spirits in the household. They say there is a ghost at Speke Hall so after research I plan to write a new poetry sequence to add to my portfolio of mythical poems written around trees. 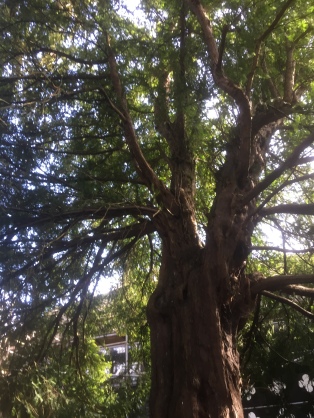 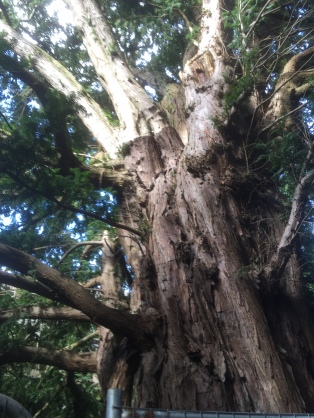 And we managed to visit Chirk Castle. A mini bus drives you up to the castle because it is so high. When it’s too windy the castle closes so we were lucky it was open. I managed to get a photograph of a wonderful rainbow on our way out. 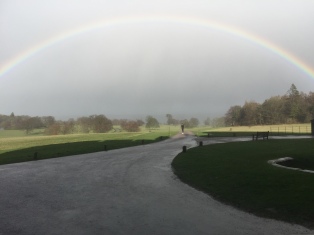 And of course we couldn’t go to Liverpool without going through the Mersey Tunnel – even this has changed since I last went through it. It was exciting to show my husband Liverpool as it was his first visit but it definitely won’t be the last. I loved going home.

My visit was both enjoyable and emotional as I took myself back to a young child, but I also made lots more new memories.