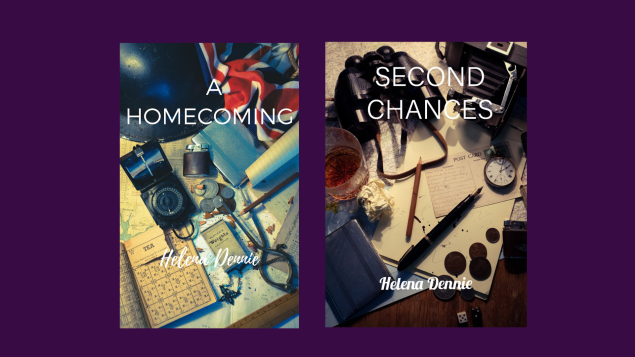 Today I welcome Denise Leggett as my Tuesday Guest or should I say Helena Dennie. Denise has come along to talk about her writing so without further ado, I’ll pass you over to Denise.

I began my writing career aged four: a “graphic novel” consisting of a house, a ship with a funnel, a yacht consisting of three triangles, some trees and some “people”. I hadn’t discovered joined-up writing. That came later as my writing career declined. After that it was a case of a long period in the education system and reading rather than anything not work-related.

Since returning to writing seven years ago I have written six novels – seventh on the go – two of which, A Homecoming and its sequel, Second Chances are out on Kindle at £1.99 each. They are inter-related and set in and around the Second World War. The impetus for them came from my last place of work – the Old Royal Naval College at Greenwich. Although the Royal Navy had long-since to occupy the place its presence could still be felt – especially after dark when the floodlights were on – and although the nuclear reactor had been removed there were times when there was a green glow. It was an inspirational place to work especially when cruise liners moored there or when a Royal Naval ship was there “showing the flag”. To find out more about the Navy during wartime read A Homecoming.

Part of what links the novels is the exploration of rites of passage for many of the characters as they are pitched from school into the dangers of war and how that experience shapes their lives and what they are to become as adults.

The later novels move characters familiar from the first two novels into the world of espionage – a life-long interest. I am about to be in Trieste in 1949 where I am investigating “rat-lines” of former senior Nazis out of Europe via Trieste – dangerous place for trafficking criminals but also a flashpoint in the coming Cold War. This is what makes writing fiction interesting for me. That and the time spent on research – sometimes far more interesting than the writing process.

Links below where you can buy Denise’s novels.

Denise Leggett lives in Sussex. She writes as Helena Dennie. Most of her life was spent in South London where she went to school and where she worked for many years “de-constructing” texts. She regards herself as a life-long Londoner who grew up with a mountain of school trips to so much of the rich tapestry that London has to offer – part of what has been so aptly called a “cultural kitbag”. It left me with a love of the South Bank Centre and fond memories of listening to free jazz in the Festival Hall on her way home from work. Those and afternoons in the National Theatre when there were no matinees and the place was almost empty.